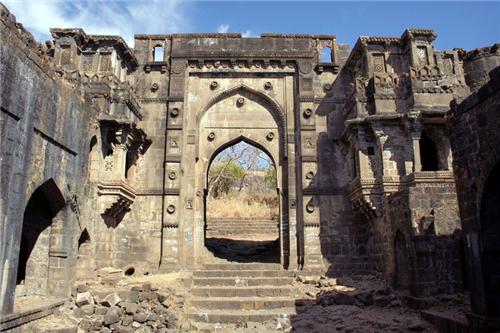 Narnala or Shanur Fort is one of the earliest forts of the Amravati. The fort was established by the Gond kingdom in the 10th Century AD, later on went under the Rajput rule and was renamed after Rajput king Narnal Singh. The fort is located in the Akot taluk on the southern part of the Satpura range. The entire fort is at present situated within the Melghat Tiger Reserve.

History of the Narnala Fort

The Narnala Fort was first built by Sultan Mahmoud Gazhnavi, which later got reconstructed after Mughal invasion in the region. The fort structure was recreated with typical Mughal architecture and a mosque was built in the middle. The whole fort area is divided into three small forts which are Zafarabad (or Jafarabad) on the east, Narnala in the center and Teliagarh to the west. One can take their own car to the main entrance to the fort area. The road goes through a graveyard area with many Islamic tombs on both sides.

Architecture of the Narnala Fort

While entering the fort, visitors have to pass through two large architecturally rich gateways namely the Delhi Darvaza and the Sirpur Darvaza and one small gate known as the Mahakali Gate to enter the heart of the fort. The fort area holds the famous tombs of Bagh Savar Wali and Gaz Badshah, the two great rulers of their times. Inside the main fort area is the “Ambar Bangala” or the Kacheri or court of those days.

The fort is spread over an area of 362 acres, with 360 watch towers. The whole structure is constructed out of white sandstone and is very flamboyant. The gate is designed with motifs of lotus and has a highly decorated cornice with Arabic inscriptions. There are projecting balconies, whose panels exhibit intricate lattices of stone work and varying designs. This type of architecture is identified as the Sultanate style of design. The central dome of the mosque has the sculpture of a beautiful “Ashtakamal” or eight petal lotus, which was the symbol of Narnal Singh’s dynasty. For uninterrupted water supply, the fort had an aqueduct connected to 19 tanks which was used to catch rainwater.

Tourists visiting the fort will be mesmerized by the grandeur of the Fort and have a feeling of traveling back to the heydays of this fort. Tourist cabs and taxis are available from the local travel guides for a day’s trip to the Narnala Fort.