* In case of any delay in receiving the OTP, you may verify it later. Please proceed without verification.

Your mobile number is not registered with us. Please register your mobile no.

During the year 1973-74, the Government of India in consultation with the state governments started the tiger conservation project in India. Melghat Tiger Reserve is one of the nine reserve forests which was set up during that time. On 1974, this was the first Reserve Forest of Maharashtra with a built in area of 1571.74 square kms. Later on, the reserve forest coverage was expanded to 2029.04 square kms, with no existing population in the core area and the highest concentration of tigers.

How to Reach the Forest?

One must visit the northern part of Amravati district to reach this forest area, which is exactly located at 21°26'45?N 77°11'50?E. The forest is snuggled in the jagged cliffs and sudden climbs of the Satpura Mountain Ranges, by the border of Maharashtra and Madhya Pradesh. The name “Melghat” means “meeting of the ghats”, which is derived from the topography of the region with unending mountain range. The forest area is mainly a concentration of tropical dry deciduous trees, with a predominance of Teak. This forest area has been daunted with five major rivers namely, Khandu, Khapra, Sipna, Gadga and Dolar flowing along with their tributaries. 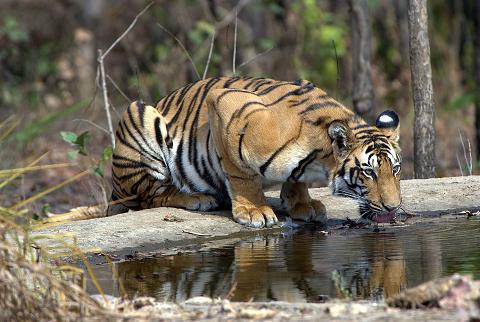 The Melghat Reserve Forest is a popular tourist spot with droves of nature lovers visiting each year. The Melghat Tiger safari is a highly recommended experience for tourists, since there is a high density of Tigers and Leopards in the forest. As of 2012, Tigers count was at 73 and Leopards was at 57. Since the area has a majority of bamboo jungle, the possibility of sighting these majestic wild cats becomes higher through the sparse bamboo trees. The Jungle Safari is organized by the government and bookings for the same can be done online via the following web link:

The safari options available through the above web link might become a bit overwhelming for some tourists. Hence, one can do the safari booking on spot at the Semadoh Tourist Complex too. The Melghat Tiger reserve forest can be accessed via three routes from Mumbai. The first route of Paratwada (Amravati) is 770 kms from Mumbai, via Nashik, Dhule, Jalgaon and Akola, reaching Semadoh. The second route is via Harisal (in Madhya Pradesh). It is 720 kms from Mumbai, winding through Nashik, Jalgaon, Bhusawal, Burhanpur, leading to Semadoh.

However this second route has a very bad stretch of road extending almost 80 kms between Burhanpur and Dharni (Harisal). The road is almost non-existent and takes almost 3 hours to cover. The reserve forest is closer to other major towns of Maharashtra, Amravati and Badnera being 90 kms away and Nagpur being 235 kms. The road connectivity is very good from these places. One can always take a railway ride to these towns and then cover the remaining distance via road. Point to note is, the entry gates to the forest are at Semadoh, Harisal and Chikal Dhara. After 6:00 pm, the entries are restricted. Throughout the day the gates open at the interval of 3 hours each. Hence it is recommended to know the exact times of entrance beforehand, unless you do not mind waiting at the gates for 3 hours.

Once inside the forest, there are few good options for your stay. Accommodation can be availed at Semadoh Tourist Complex, Kolakas Toursist Compes (about 14 kms away) and the Chikaldhara Convention Complex (about 22 kms away and maintained by the Maharashtra Tourism Development Centre). The Semadoh Tourist Complex is a favourite due to its easy access, being located on the Maharashtra State Highway No. 6 (MH SH 203). The complex being located at the starting point of the Safari, it helps to attend the schedules on time.

The accommodation rates are economical at Rs. 700 per night, per cottage. Rs. 80 is charged for cars as an Entry Fee to the Reserve Park. The ambiance and the hospitality of this place are delightful as per the standards that can be expected in such a remote area. The tourist complex has a small Museum and Nature Interpretation Centre. However, the maintenance of these is not up to the mark. 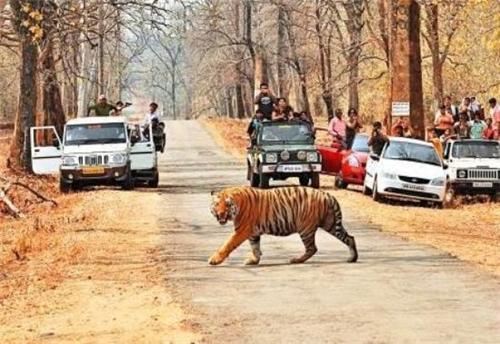 The timings at the Safari vary as per the season. The summer season lasts from 1st March to 30th June. The safari is scheduled between 5:30 am to 9:30 am in the morning and between 4:00 pm to 7:00 pm during this season. During July to September, the safari remains closed because of the monsoon. Again the winter season starts from October, till March. The safari timings in winter is 6:00 am to 10:00 am and 3:30 pm to 6:30 pm. Safari guides are available and are mandatory. Previously there were about four to five numbers of government owned Safari Gypsy vehicles; available for online and spot bookings at the rate of Rs. 1500 per trip. Use of personal vehicle is also allowed with Rs. 300 per trip rate and a refundable deposit of Rs. 650. A third option of renting cars locally is also available, which is however a little expensive at the rate of Rs. 3000 per ride.

During the safari, it is always advisable to wear comfortable cloths and walking shoes. Lot of water should be kept for the summer season. The safari actually starts about 5 kms away from the Semadoh Tourist Complex. The chances of sightings are better in the early mornings. Other than the tiger and leopards, there are huge populations of wild bison, Sambhar deer, Peacock, wild dogs, barking deer and various types of birds that are easily to glimpse upon. The tigers and leopards, being animals of solitude are difficult to spot.