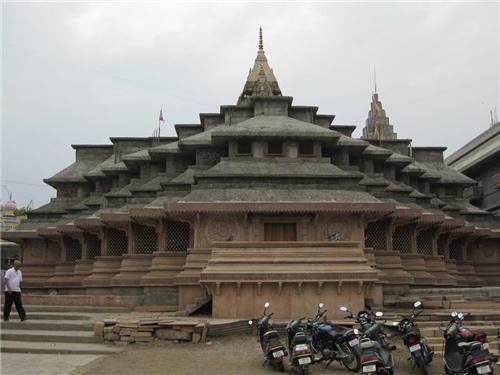 Shri Ekvira Devi Temple is another popular religious place of the Amravati district and is situated very near to the famous Ambadevi Temple. This temple is believed to be built in the year 1660 and is devoted to Goddess Ekvira Devi, who is regarded as an incarnation of Amba Mata. As per Indian belief, this temple is a manifestation of “Shakti” or divine power.

This temple is believed to be built by Paramhans Shri Janardan Swami Maharaj or his son in memory of his father. Legends say that roughly 500 years ago, Janardan Swami used to live in this region. He was a devoted worshipper of Goddess Amba and used to visit Ambadevi Temple every day to offer his prayers. During those days, a stream used to flow beside the Ambadevi Temple, which had to be crossed to reach the temple area.

Once this stream was too much flooded due to Monsoon, it became difficult for Janardan Swami to cross. Goddess Amba saw her devotee in such distress and offering his prayers from the other side of the stream. She herself came down on Earth in a different human form and an arrow miraculously appeared signifying the presence of the Goddess. This form of Amba Mata is thought to be Ekvira Devi and the temple of her was built at the place where the arrow hit the ground. 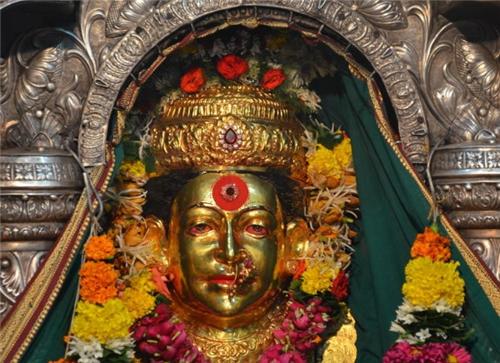 The temple complex still displays the Samadhi or tomb of Janardan Swami. There is a well where Swamiji used to perform his penance. The temple complex is bordered by a huge stone wall with many decorative arches. The main Mandap is a twenty four pillared structure with beautiful pictures painted on the walls. The centre area is the main Gabhara or Garbagriha, where Devi Ekvira’s idol is worshipped everyday. The main idol is made of silver and the platform on which Mata sits is also a silver coated one. There is a pure brass door to the Gabhara. In front of the Gabhara is an eight pillared Mandap with beautiful chandeliers hanging. Devotees are allowed to sit here and meditate in front of Mata from a distance. A temple building has a conical structure on the top which makes it resemble to a Pagoda and the cone is made of gold

During the nine days of Navratri, Shri Ekvira Devi Temple witnesses huge tourist rush every year. A fair takes place in front of the temple complex from Asvin Suddha Pratipada to Dasami (for nine days). This temple is 1.8 Km from Amravati Railway station and autos and local taxis are available for a drop to this temple in Maharashtra.


Explore more about Tourism in Amravati