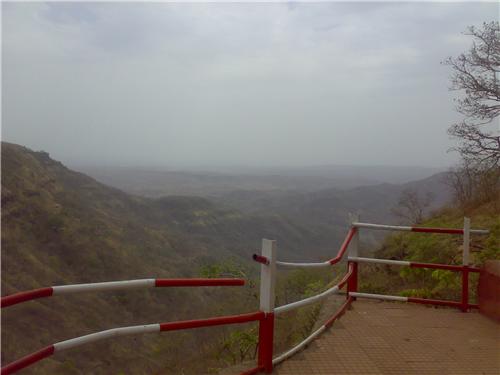 The Amravati district has been an important religious destination for over a century, due its historical precedence mentioned in some of the oldest literature of the Hindu religion. The fascinating temple structures dotting the region create a sentiment of piousness, drawing thousands of devotees to visit for religious tourism over here. The ancient temples amidst the forest and mountain make the visit memorable. To compliment the religious tourists, new avenues of leisure tourism has also opened avenues in the area due to the beautiful landscapes, flora and fauna offered by the region. One of the main taluks of the district is Chikaldhara, which mesmerizes tourists with its amazing beauty and awesome tourist locations.

The Devi Point is one such location on the Chikaldhara hill station. Around 86 kilo metres from the Amravati town, Devi Point is the place from where river Chandrabhaga originates and flows amidst the rocky ranges. The point is almost near to the hill top, from where the entire forest region of the Melghat Sanctuary is visible. The panoramic view offered from the top of the hill is the photographer’s paradise. For the leisure visitor, almost the entire day can be spent just sitting in the mesmerizing solitude of the nature.

The Devi Point is so named because of the presence of a Devi (goddess) Shrine on the rocks, beside which the river flows. The historical shrine is in the form of a rock. The devotees visiting this shrine have recently built a temple to cover the Shrine. The ruins of the Amravati Fort are also visible at a distance from the hill top.

The Devi Point is located approximately 2 kilo meters from the local bus stand and state transport buses commute everyday between Amravati town and the hill station. Local taxis and autos are available for a day’s trip to the location.