The Amner village of Amravati district is popularly visited by tourists because of its two main attractions - the ancient Mahadev Temple and the Amner Fort. This Mahadev Temple is believed to be two hundred and fifty years old and is placed on the left banks of the Wardha river. The temple had not been maintained well and is found in a ruined state inside an old ramshackle fort area. The temple remnants are located at the border of Amravati and Nagpur districts. The mud fort surrounding the temple is at a complete wrecked state with only huge mounds of earth visible. This temple along with its surrounding portrays the picture of ancient history of the district.

Surprisingly the structure of the temple is more or less intact with few bricks and plaster missing here and there. The temple complex is made up of stone, brick and mortar. The temple faces the east and while entering one will find a Mandap or canopy covered area, with decorated pillars. The main “Gabhara” or the central sacred place is where devotees can find the Shiva Linga. The Linga is displayed in a square area measuring about 15 square feet, with a jeweled crown on the Shikhar (top) of the Linga. Inside temple walls are painted with pictures of Nandi, Lord Shiva’s Vahan or animal transport. 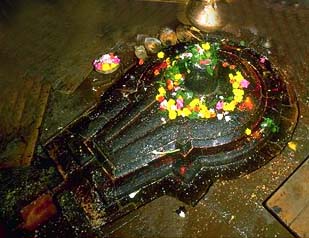 Adjacent to this Mahadev Temple complex is a deep pool whose waters are considered as holy by the Brahmins.  At the bottom of this pool there was a temple which has become abandoned now. As per local myths, the pool temple was actually presided by Gods in ancient times and anyone praying for cooking utensils used to get real utensils in the next morning. These utensils had heavenly magic and one could only use them during crisis. People who used them were bound to return the utensils back to the Gods, once the crisis period was overcome. From the central Mandap, the entire Jalalkheda village of Amravati is visible.

The most striking thing of this entire fort area is the presence of the Makbara of Lal Khan Pathan beside the temple. The Markbara is a stucco domed tomb with Persian scriptures inscribed on its walls. There are aalso small pores etched on the four corners of the walls. The speciality of this tomb is that this was built by some Hindu Raja for his friend, Lal Khan Pathan.

The local villagers are daily worshipers in Mahadev Mandir. Many devotees come from various parts of India during Maha Shivratri, when special puja are performed. The temple gets decorated with flowers during this time. A huge fair is organized at the fort area with over 15000 tourists estimated to be visiting the place, during the occasion.