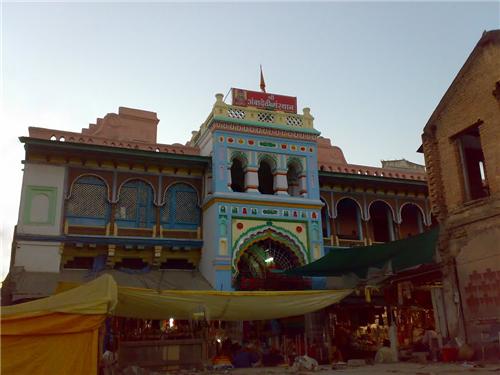 The oldest and the most divine temple of the entire Amravati district is the Shri Ambadevi temple. Situated in the heart of the Amravati town, the temple complex illustrates very old scriptures, engraved on the walls. The temple is dedicated to the main deity of the district “Goddess Amba”, who is another incarnation of Goddess Durga. Thus tourists can experience a grand festival in and around Ambadevi Temple, during the time of the Navratri. Amravati district is believed to have been named after the presiding deity, which translates as “The Eternal City” or “The City of The Immortals.”

History of the Ambadevi Temple

The construction date of the Ambadevi temple is unknown, with a prevalent legend that the temple structure dates back to Lord Krishna era. Krishna is believed to have married Rukmini in this temple, after eloping with her. Goddess Amba is worshiped with great admiration by the people of the Hindu community. Each year devotees come to visit this temple from all parts of India, especially during the Navratri season. More than two lakh worshipers pay visit during this time. The people of Amravati conduct a mandatory puja of Goddess Amba before marriage or any other auspicious ceremony of the house.

The Ambadevi temple complex is surrounded with high walls and on entering the compound, one can find a huge spacious hall. The left side leads to the courtyard through a number of corridors. The main gates are huge with the look of a fort gate. Above the gate, there is a small chamber also known as the “Nagarkhana” or the drum room. The temple walls are full with pictorial depiction of the Puranas. 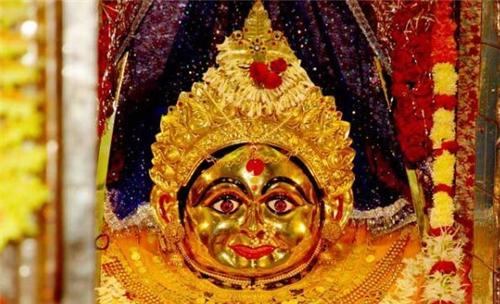 The main “Garbagriha” or the “Gabharas” is broken into three large arch shaped rooms with sandstone idols of Goddess Ambabai, Lord Ganapati, Lord Mahadev, Lord Vishnu and Goddess Parvati. The central chamber is where Goddess Amba resides with Lakshmi and Narayan. Two silver lamps are seen burning in front of the deities for 24 hours and 365 days. The western wall of the temple complex has idols and engravings of various Gods and Goddesses. The age of these idols are uncertain. They are engraved with such detail that they almost look like machine cut. It is still a mystery about the creation of the temple plaster work and ornaments of the deities.

Outside the temple complex, there is a local market. Tourists can enjoy shopping local knick knacks like Rangoli powder, toys, brass souvenirs and pooja items for home. The Navratri or Navratra festival is celebrated with pomp and grandeur over here. During those nine days, the temple remains open for public throughout the day. Various cultural and religious programs are performed by many good artistes of the region.

Proper sitting arrangements are made to enjoy the social and cultural programs. Even “bhog” (holy meal available for common public, after being offered to God) are available for free at specific times of the day. The entire area gets decorated with flowers and colourful papers. Every year a huge “Mela” with varieties of stalls is arranged for the visitors. There are few good hotels and holiday homes nearby the Ambadevi Temple. Booking should be done with prior notice, as the Navratri is considered as the peak season of the entire district.

Ambadevi Temple is very conveniently located at the Gandhi Square of the Amravati town. It is around 1 Km towards west from Amravati Railway station and 1.5 Km from Amravati Bus Stand. Local buses, taxis and autos are easily available to reach this place. Even taxis can be availed from the nearby Badnera Railway Station of the district. The temple is around 155kms from Nagpur, direct state buses are available from there to reach Ambadevi temple.